Because I’ve participated in more trade shows than I can remember (since shortly after college when I was a brand-new entrepreneur), it’s tough to even recall my very first experience. But there are definitely some rookie mistakes that I remember from those early years!

1 – Don’t stand behind a table.
Where did you learn how to exhibit? Odds are you learned by watching others, just like I did. Unfortunately, most exhibitors — especially those in a 10×10′ space — have one standard layout: table on the aisle with chairs behind it. While I don’t remember ever using the chairs (too much nervous energy/adrenaline), I did initially stand behind that ugly six-foot table with my products spread out as a barrier between me and the attendees. So much wasted space in my booth! If only I’d made better use of it.

2 – Put less stuff in the booth.
Once I did learn to move that table out of the way, then I went to the opposite extreme, better known as “let’s FILL this space!” I tried to cram everything anyone might possibly be interested in into that 100 square feet (or once in a while, a luxurious 200 square feet). The poor attendees were on such a stimulus overload that they couldn’t tell if they were interested or not!

3 – Don’t allow food or drink in the booth.
This was a very expensive lesson for me. Since I was selling an upscale line of women’s clothing, I had a sales portfolio with photos and swatches of all the fabrics available. At one show, my fellow booth staffer set her can of cola down next to my open portfolio, someone came by and bumped the table, and you can imagine what happened next. We cleaned it up the best we could, but I know my professionalism was compromised for not only that show, but every other time I opened that book for the rest of the season. That’s when I made my “no food or drink” rule for every future exhibit!

4 – Choose your team wisely.
Because I was an independent sales rep, I often shared a booth with other reps. Some of them were hard workers and took booth duty seriously, but many of them did not (strange since we were all there to get business). Why were they not good staffers? Some merely wanted to “warm a chair” or socialize with everyone they knew at the show vs. working hard at connecting with new leads. This was especially unfair when it came time to split up the names we gathered and the “do-nothing” staffer went home with names we feared would never be contacted (and probably weren’t).

5 – Do more pre-show promotion.
I remember one of my first times doing pre-show promotion. I sent out 25 postcards to prospects I’d been trying to get in front of, but hadn’t been able to make the connection yet. Of those, 12 came to my booth, and many thanked me for inviting them. A few even said that my postcard was the first notice they’d had about the expo. Imagine if every exhibitor on the floor had sent personal invitations!

6 – Work more closely with show management to maximize opportunities.
This one I learned very early on. Possibly because I was so clueless, I reached out for help from show management. I wanted to know what other opportunities there were: attendee lists, presentation times on the stage, sponsorships, etc. I wasn’t always able to take advantage of all the opportunities, but at least I made sure to evaluate them to see what was the best fit for me and my team. Because of that, I sometimes had access to tools that no other exhibitors even cared to know existed!

I’ve always said that exhibiting is not rocket science. It’s simply a matter of making the most of every opportunity, whether before, during or after the show. It’s also an important partnership between exhibitors and show management.

If you are new to the world of exhibiting, you may want to request a free copy of the “Beginner’s Guide to Exhibit Marketing” Toolkit. In addition to a handbook with basic tips, you’ll also receive an exhibitor’s checklist and a glossary of terms you need to know.

So what do you wish you would have known when starting out in trade shows?

© 2012 Marlys K. Arnold  (from the January 2012 TradeShowTips Online. To receive tips like this in your inbox every month, please take a moment to fill out this request.)

Want to reprint this article in your blog or ezine?
You may do so as long as it is reprinted exactly as written, and it includes the copyright notice plus the author bio (below). 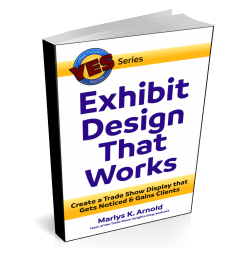 Inside this guide, you’ll discover how to avoid the most common – and not always obvious – mistakes in exhibit design. Create a multisensory experience that exceeds expectations and connects with attendees.

Thanks for spending time here!
If you like what you've seen or heard, you can be a supporter ... and get some tasty perks!

It happens leading up to nearly every trade show — exhibitors get all stressed out over the location of their booth. Many believe that your location on the floor …
May 31, 2017|